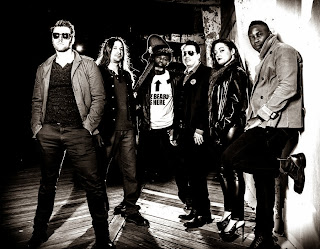 Midnight Mosaic are an outstanding lively bunch of musicians who have awesome star quality give them a listen it's so worth it!!!
They have what it takes to make a huge impression on the music industry they are entertaining & show spectacular talent, creativity, passion & uniqueness in a nutshell they are AWESOME with lashes of charisma & charm to boot!!

They have just released their first full-length album entitled "Firework" featuring 10 hot tracks it's out now get their album and show your support their music will keep you rocking around the xmas tree all night long!!! 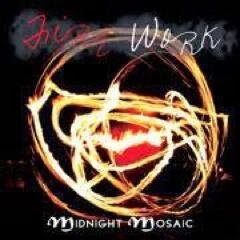 "Firework" includes bristling rock anthems and hot blooded soul romps which include:
Check the album out for yourself here:

I loved all the songs each & every single one were top-notch the tracks that really stood out for me were:

Midnight Mosaic is an eclectic collective of entertainers, whose original brand of Rock n Soul drives their audiences wild to dance & groove, by combining elements of soul, funk, dance, indie, pop & outstanding vocals they have put their own licious twist on the Indie/Rock music scene i call it "Cross-Genre Brilliance", they are influenced by bands such as Chroemo, Red Hot Chilli Peppers, Parliament Funkadelic, The Talking Heads & epic/legendary artists like Michael Jackson & Prince, this band is truly montage of it's members individual sonic signatures.

Their music is a love for the experimental it's intriguing & highly infectious they are putting excitement back into the music scene in a genre that truly deserves it, their aim is to electrify and have you craving for more with their masterpiece of sound & empowering lyrics, i love their  immense passion & their whole creative vision of combining different genres this truly makes them so distinctive it really represents what Midnight Mosaic is all about they radiate explosive charismatic ambience.

Their music had me hooked from start to finish they have brought a new dimension to their music with their cross-genre brilliance they really live up to their name, they have an awesome unique way of expressing themselves their creative juices are constantly flowing & evolving.

In support of their first-length album they are headlining "The Bitter End" in New York City on January 18th, they are also planning shows in the early part of 2014 in Philadelphia, Baltimore, Boston, all over New Jersey & they are launching a national & international radio campaign & furthermore they will be releasing their first official music video for the first single off their album "Right To Die" it's all exciting stuff!!!!

Check out this interview with: irocktv.co Who are Midnight Mosaic?

The band formed in 2011 & has toured throughout the Northeast & Mid-Atlantic regions (USA) they have received media & industry acclaim for their energetic out of this world live performances, at the Midnight Mosaic Show fashion designer Lacy Hint stated:

"The show has begun & Midnight Mosaic started to perform, the energy of the event transferred to the band members, the drums were distinctly leading, complemented by heavy beat of the bass & high pitches of very well played keyboards once the guitar solo set the mood they vocalist let go of any decency & rocked the party"

Midnight Mosaic has been featured on a variety of web-based radio shows in the USA, Europe, Asia, The Middle East & Australia they have also been featured in various music publications which includes: Blogs, Podcasts, Websites & in print, in one publication Lauren Pulgarin from Eat Sleep Breathe Music wrote:

"Midnight Mosaic brings something new to the music industry with a new cool yet at the same time almost retro sound, it is this mix of the old & the new that will gain this band many fans in those that search for good drumming, guitar & lyrics in an industry that is currently flooded with bass drops & auto tune"

They have incredible social media presence and their marketing & press imagery is top-notch, to name a few Midnight Mosaic have been featured on the following radio shows/publications:

So what are you waiting for listen to their music and share with your friends!!! Get their album it will be one of of your most played i guarantee it!!!

Check out Midnight Mosaic on these links: